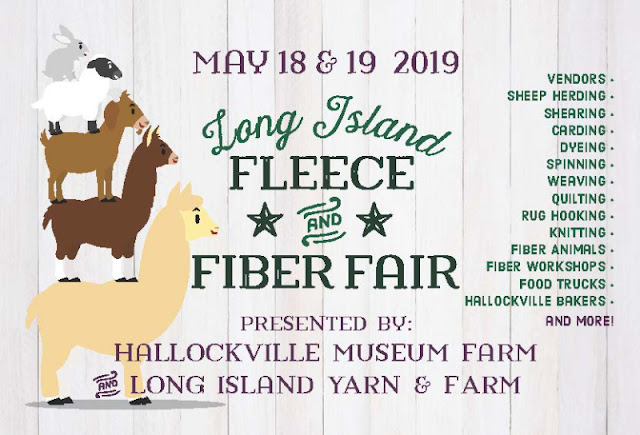 The Connecticut Sheep, Wool and Fiber Festival celebrated its 100th anniversary in 2009 and we are off to a great start for our next century.  The festival, started in 1909 by the CT Sheep Breeders Association as a program “to promote the keeping of sheep in Connecticut”, has evolved and expanded into a premier sheep and fiber festival. This event is a family friendly agricultural and learning experience for the general public as well as shepherds and fiber enthusiasts.

Barb and I will be vending again this year.  Find us in the Green Barn.  We'll have lots of woolly goodness for you!
Posted by The Paisley Studio/Sarah McNamara at 8:31 AM 4 comments:

I am saddened to hear that Dick LaBarge, rug hooker extraordinaire, passed away yesterday.  He and his husband George Kahnle, were quite a pair.  Barb and I took a class with them called Dye and Design once, but we called it Fun with Dick and George because they kept us laughing the whole time.

Here is a link to his obituary:

https://www.legacy.com/obituaries/timesunion-albany/obituary.aspx?n=richard-e-labarge&pid=189459487&
Posted by The Paisley Studio/Sarah McNamara at 11:19 AM 7 comments:

It's Mother's Day -- the first one since Peter's death.  My daughter is at home in the Pacific Northwest, wrapping up her master's degree, so I spent the day alone.  When she called this morning I told her I had three dying trees cut down yesterday, including the sweet Japanese maple Pete gave me for Mother's Day 6 or 7 years ago.  It was sickly almost from the beginning, with some sort of black disease creeping up its limbs and this year, half of it was dead. I knew it had to go.  Even so, I was sure that at some point today I would be crying yet again, mourning the loss of the tree and the man who gave it to me.

After Pete's funeral in February, when everyone had left and I was alone in our lovely home, I felt a sudden lightness, a lifting of the shroud that had encompassed us as we fought our way through chemotherapy three times a week, 90 miles away from home, and three very long hospitalizations.  I hadn't even been aware of the shroud then, I just faced each day with every ounce of strength I could muster.  I adhered to all the restrictions Pete was given after his stem cell transplant -- all 12 pages of them.  No travel,  no restaurants, no houseplants, no dogs, no gardening, no movies, no house guests, no tap water, etc., etc.  We had a new normal, and that was okay.  Whatever we had to do, we did it.  We wanted to beat the disease.

We lost the battle on February 8, five days after my daughter married her sweetheart Josh at Pete's bedside.  As rare as T-Prolymphocytic Leukemia is, it is even rarer to find anyone who survives it.  During Pete's final two weeks in palliative care, when it was clear he would not survive, Pete and I, along with his brother Clem, Clara and Josh, were able to plan his funeral and to organize all the stuff that needs doing when someone dies.

So here I am -- three months a widow (such a very strange word!), still grieving, but moving forward a little bit at a time.  I'm working at my rug hooking again and planning a big party to celebrate Clara and Josh's marriage.  I'm catching up on deferred house maintenance and trying to garden a little bit each day.  It's good to have the sun on my back.  And just a few minutes ago I found a tiny Japanese maple seedling growing by the back porch.  I'm going to pot it up and watch it grow.
Posted by The Paisley Studio/Sarah McNamara at 8:28 AM 6 comments:

I'm on the ferry, heading up to the Eastern States Exposition for the Fiber Festival of New England.  This is the last away show of the year for me, and I have to say, it will be a relief to stay put in Greenport for awhile. Barb and I will once again be in booth 457 East, with lots of delicious wool for rug hooking and appliqué, as well as miniature needle punch supplies and finished goods.  So come and see us!

This year has been remarkable for me on the rug hooking side: my work was featured in my friend Tracy Jamar's wonderful book Coils, Folds, Twists and Turns: Contemporary Techniques in Fiber (I have a few copies to sell this weekend), and I was invited to teach and vend at Sauder Village Rug Week -- an honor and a delight, to be sure.  My work will also be included in a show at the V.S.O.P. Gallery in Greenport -- more on that to follow.

On the personal side, dealing with Pete's T-PLL (a rare and very aggressive type of Leukemia) has been life-changing, to say the least.  We live with many restrictions, but Pete has sailed through the process of chemo and the stem cell transplant with relative ease -- until a few weeks ago.  The disease has reared its horribly ugly head again, and his white blood cell count is climbing.  He received a boost of donor stem cells that had been frozen back in April on Friday.  Wednesday he began a round of a chemo drug to boost the efficacy of the donor cells.  At the end of a long day at the clinic, he was diagnosed with a blood clot in his left leg and had to be taught to inject himself with a blood thinner.  Thursday morning he faced debilitating nausea.  That's under control now, or I wouldn't have left him for the weekend (some special neighbors are keeping a watchful eye on him for me).

The coming year will see us continuing the battle for Pete's health, as well as planning our daughter's wedding to be held on the shores of Peconic Bay next September.  It's so good to have something joyous to plan and participate in, in between trips to the clinic. We look forward to having Clara, Josh and their golden retriever puppy, Bernadette, with us at home often in the coming months while we plan and execute the wedding of their dreams.

I started writing this because of all the sickly people on the ferry this morning.  So many people are coughing and sneezing and spreading germs and really should be at home.  I have managed -- with lots of prolonged hand-washing and gallons of Purell and lots of Clorox wipes - to stay healthy for the past year so that Pete can stay healthy, too.  A cold is no longer just a cold to me, now that I know what a catastrophe it can be to a person with a compromised immune system.  All you sickies should be home in bed until you are no longer contagious! Someone's life may depend on it!  I'm going to be royally ticked off if I get sick from a ferry ride . . .
Posted by The Paisley Studio/Sarah McNamara at 7:31 AM 4 comments:

The Southern Adirondack Fiber Festival is now the Adirondack Wool and Arts Festival!  Always the third weekend in September, this fine festival outside of Saratoga Springs, New York, is a delight.  The weather is usually perfect, and the leaves are just starting to change, making for a great weekend out in the open air. 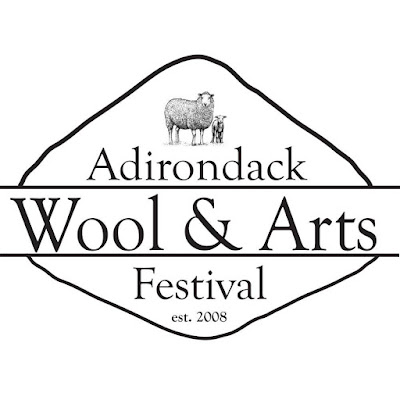 Sunday, September 24th,
10 am to 4 pm.
Barb and I will be heading up on Friday to set up our booth.  We are, once again, in Building 12, Booth 7 -- the building you go through right at the entrance!  We have some beautiful hand-dyed  and mill-dyed wool fabric for rug hookers and quilters, and I have some new pattern designs for you as well as old favorites.  Please come see us!

Here is the website: Adirondack Wool & Arts Festival   There's a $1 off coupon on their home page!  Hope to see you there.
Posted by The Paisley Studio/Sarah McNamara at 7:41 AM 3 comments:

I'll be demonstrating rug hooking in the Peconic Ruggers' tent at Hallockville tomorrow if you'd like to join me.  This Fall Festival is always fun for everyone.  Hope to see you there.
Posted by The Paisley Studio/Sarah McNamara at 12:20 PM 3 comments: