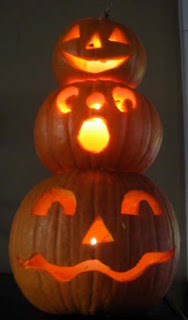 I wasn't going to do Hallowen this year, but at the last minute, I ran out and got some candy and 3 little pumpkins. Aren't they cute?

Have a happy and safe Halloween!
Posted by The Paisley Studio/Sarah McNamara at 2:01 PM 1 comment:

My guild had their rug show this weekend, in the beautiful Naugles barn at Hallockville Museum Farm in Riverhead. We had glorious weather, and a good turn out, as well as a beautiful collection of rugs. Barbara, Judy, and Jennifer did a fantastic job of putting it together, and a host of members pitched in to help.

Here are some pictures of the great rugs on display. 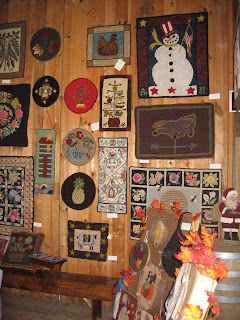 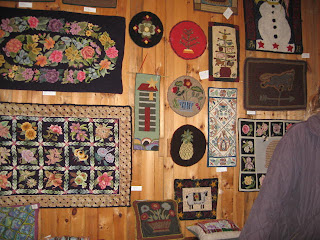 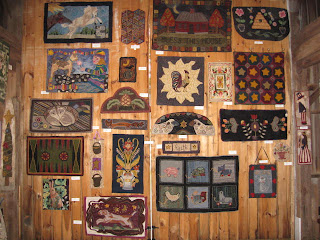 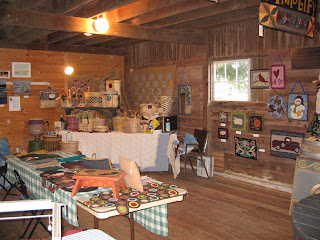 On another note -- we have just found out that the Newtown Rug Show will not be held the third weekend of October in 2009 -- which is a very good thing because that is the NY Sheep and Wool Festival weekend. It will be held on October 3 instead. So mark your calendaers -- Barb and I will be there.
Posted by The Paisley Studio/Sarah McNamara at 4:53 PM No comments: 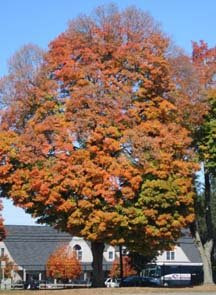 It was another glorious, glittering autumn weekend in the Hudson Valley. My car windows were frosted both mornings . . . the perfect temperature for indulging in all things wool. 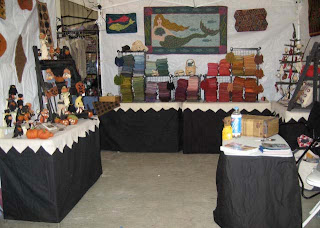 The crowds at the New York Sheep and Wool Festival were absolutely amazing on Saturday. We had lots of returning customers mixed in with the new and we met some online friends, too. I was pleased to see Naomi of Ravens Gate Primitives again. We first met at the Fairfield rug show back in the spring. My friend Christine Henson, owner of Now and Zen Yarns in Greenport, checked in with her husband Charlie Thorp (Charlie built my studio several years ago.) A whole passel of Peconic Ruggers showed up -- they all rode up on the bus with the local spinners' guild: Ron, Barbara, Judy, Jennifer, Sally, Sue all looked exhausted by the end of the day. As always, Abby Vakay -- who was palling with Tracy Jamar -- had boundless energy. It was great to see them all. And Barb and I really enjoy chatting with Toni from The Fold, who sells Socks That Rock yarn. Her booth always has the longest line of customers . . . One of these days I'm going to visit her in Marengo, Illinois and take her silver Audi TT out for a spin . . .

The biggest thrill of the weekend: I was interviewed about rug hooking live on WKZE, the local radio station. The woman who interviewed me was named Sally, who hooks rugs herself, and the owner and manager of the station is named Barb -- which is kind of funny, since my sister's name is Barb and my family calls me Sally . . . Anyway -- I'm glad I didn't hear myself, because I was awfully nervous. 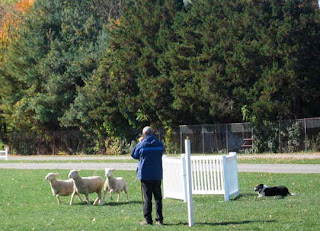 We were so busy I didn't get around much. I did step outside to watch the sheepdog trials for awhile. The dogs were absolutely amazing. I checked out a few of the other vendors, too, and bought some yarn for more socks. I wanted to buy a "Llamas for Obama" pin, but never got around to it. . . they were selling like hot cakes.

So now it's time to get ready for next year's Festival, to be held on October 17 & 18, 2009. Barb and I already have a theme for our booth and I've started drawing sketches for new rugs . . . Hope to see you there!

Sarah
Posted by The Paisley Studio/Sarah McNamara at 11:23 AM 1 comment: 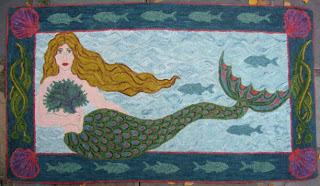 This is the weekend for the Sheep & Wool Festival -- my favorite show of the year! Please come and visit us in Building A, booth 29. It looks like it will be another crisp October weekend in upstate New York and we are looking forward to visiting with all our friends from years past, as well as all newcomers.

It's two days of fun and fiber at the Duchess County Fairgrounds in Rhinebeck, New York. It goes from 10 am to 5 pm both Saturday and Sunday. Hope to see you there.

If you come, you'll see my mermaid rug, the centerpiece of our booth this year. This was one of those UFOs that was hanging over my head -- remember back in January when I resolved to finish some of my unfinished objects? I designed this in a great class at the Shelburne Museum in 2004 -- a dye and design class with Dick LaBarge and George Kahnle. Barb and I took the class together (she hasn't finished her rug yet!). We enjoyed our teachers so much we called the class Fun with Dick and George. They are both talented and funny guys . .

I used a lot of Barb's hand-dyed wool in the rug and am quite pleased with how how it turned out. I fought hooking it the whole way. I really dreaded doing her face. But it all worked out in the end. I call it "Cinnamon Bay Siren" after my favorite beach in the world. Now if somebody would just buy her . . . I have made a pattern of her, too, so if you want to hook up your own version, just drop an email! I'll be incommunicado til Tuesday -- unless, of course, you come to the festival.

Sarah
Posted by The Paisley Studio/Sarah McNamara at 4:10 PM No comments:

Is It Still Summer? 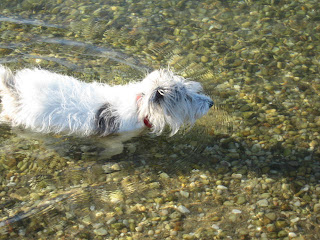 Cairo and I had a lovely walk on the beach this morning. (As you can see from the photo above, Cairo had a nice swim, too.) If I hadn't seen a busy squirrel run by with a fat black walnut in his mouth, I would have thought it was the middle of July. It has to be close to 70 degrees already, the sun is warm and the air is perfectly still. I wanted to sit on the dock in the sun for awhile, but the New York State Sheep and Wool Festival is this weekend and I still have work to do!

Cold weather is supposed to move in tonight. I'm hoping the rain stays away so that the weekend is crisp and the leaves stay on the trees upstate until I get there.

I'll post the particulars about the festival tomorrow. On Friday morning I'll set off for Rhinebeck and won't return until Monday.

Sarah
Posted by The Paisley Studio/Sarah McNamara at 6:26 AM No comments:

I had another great birthday weekend! The best present of all was a visit from my lovely daughter Clara. She had Thursday off because of Yom Kippur and she doesn't have classes on Friday, so she had a 4 day weekend. We spent Friday together shopping for craft supplies and groceries.

Clara convinced me that we needed to have duck a l'orange for my birthday dinner. (She fell in love with duck when we went to Paris 6 years ago. The hoof and mouth panic was in full swing then and she wouldn't touch beef. I think she ate duck everyday that week . . .) Anyway, Long Island used to be the place for duckling, so we went in search of a duck. We found one at Skelly's farmstand in Aquabogue and roasted it to perfection. We also made wild rice from northern Wisconsin and a salad with some of the last tomatoes of the season. 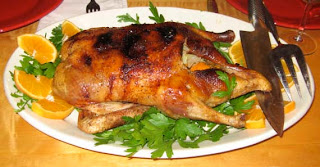 Clara brought my birthday cake all the way from Mrs. London's Bakery in Saratoga Springs. (Mrs. London;s is owned by the same fellow who own's Max London's, where Clara, Barb and I had one of our best meals ever earlier this year.) It's called, I think, Chocolate Raspberry Supreme and is layers of chocolate mousse and raspberry glaze surrounded by molded dark chocolate. It's fabulous! (There's still some left . . .) Here's a photo of Clara and the cake: 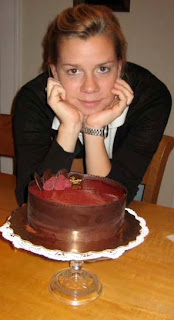 Thanks to Clara and Pete for a lovely birthday, and to all my friends for the kind birthday wishes -- especially Paula -- who always knows when I need to talk to her.
Posted by The Paisley Studio/Sarah McNamara at 2:18 AM No comments: 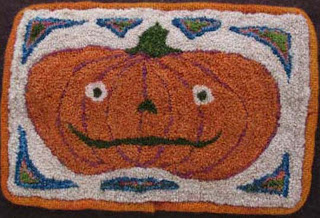 There was a stiff wind blowing from the west this morning as Cairo and I walked the beach. Fall is here at last and that means that Barb and I are gearing up for our big show season.

Barb and I hope to see you this weekend!
Posted by The Paisley Studio/Sarah McNamara at 9:15 AM 1 comment: